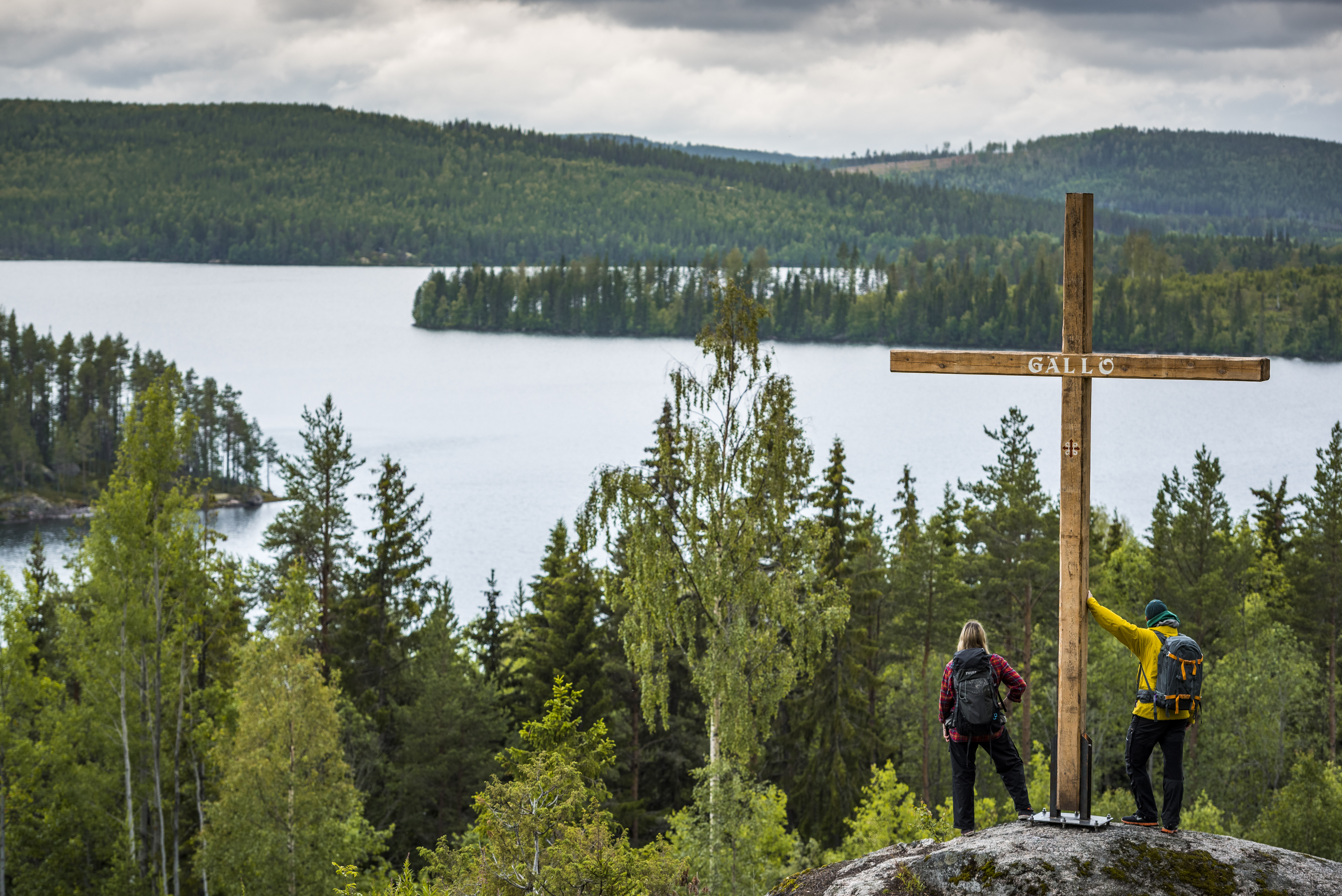 Through deep forests to the open fields of Storsjö, you pass Jämtland forests where robbers would once lay in wait. You pass grand wooden buildings by waters full of fish. Drink from the St Olav spring in Pilgrimstad and walk through the lush cultural landscape.

After Borgsjö you walk along the orchids of Lombäcken through a village with well-kept timber houses. There are old trapping pits for hunting moose, amongst others. At the Jämtland border there was once an inn called “Jämtkrogen” that was a tavern from the 1650s where postal riders and trading farmers would spend the night. According to legend court was held by the Altar stone by the border.

##INNS FOR EVERYBODY
In the Jämtland forests, and in Bräcke, inns would receive all kinds of people, from kings and archbishops to merchants, couriers and robbers. During the latter part of the 1800s Jämtkrogen inn was run by the legendary innkeeper Moster i Krog. The central town of Bräcke has stately wooden buildings from the turn of the last century. The town grew as the railway was extended during the 1870s. It has a recreational area by the folk museum and a small museum and a café during the summer. Bräcke church from 1859 has a beautiful location up on the hill.

Onwards and the route passes through Mordviken (murder bay), which is less dramatic than it sounds; the word mord comes from mordh meaning forest. The village is next to Revsund lake which abounds with fish, and Gimån river with its rapids and calmer waters, where many try their luck at fishing. There is a nice rest stop at Gimårasten, with a wind shelter, barbecue area and toilets. The wooden bridge crossing the river there rests on stones from the log-driving days.

Tours on the steam boat Alma depart from Stavre. Some of Europe’s oldest timber buildings can be found in Jämtland, and there is a wooden storage barn in Mälgåsen that dates from 1600. In Skelettåkern field in Grimnäs there are findings from the late 1200s.

##A MEETING POINT FOR PILGRIMS
In Revsund church there is a picture of St. Olav dating back to the 1300s. Revsund is a meeting point for pilgrims and from here the non-signposted Jämtland-Norway way heads towards the Härjedalen mountains, whilst St. Olavsleden continues west towards Anviken and the Hålleberg cave where an outlaw once hid.

It is said that in Pilgrimstad the trees around the pilgrim spring used to be full of walking sticks as the pilgrims were cured of their ailments after drinking its water. Next to the spring, the House of the Pilgrims chapel was inaugurated about twenty years ago. Something unique was discovered in a gravel pit in the area; an 80,000-year-old mammoth bone.

##A VIEW OF THE MOUNTAINS
The path passes Runberget mountain and in Svedje you can see “Kungastenen” a rock indicating where King Karl XIV Johan ate breakfast in 1835. The barley had frozen overnight, and it was the first time that the king had seen frosted crops. The hike continues towards Hållsta mill, through the villages Balsta, Slåtte and Bodal offering views of the mountains. Gymnademia, a protected orchid and the regional flower of Jämtland, grows in this area.

In Berge, by Storflatåkern field you can see what the area looked like before the 1800s with its stone cairns. The limestone in the area is the best in Sweden and there is a stone museum in Gusta. In the 1920s Scandinavia’s largest stone industry flourished in this area.

Brunflo has a 30-meter high tower, a defence structure from the 1100s, consecrated in the name of St. Olav. The name Brunflo means the well by the mire and by Lövberget there is a St Olav spring. Odensalakärret is rich in orchids, located along St Olavsleden three kilometres from Östersund. Flowers such as the royal helleborine with its dark purple-red, vanilla smelling flowers bloom here due to the calciferous water. Marked trails and wooden walkways take you onwards amongst fly orchids, fragrant orchids and twayblades.

Östersund is the only city in Jämtland county and was founded in 1786 by King Gustav III. Visit Jamtli, a vibrant history museum where in the summertime you will be met in the historic buildings by people in period outfits, telling you about life in the past.

MAPS AND ACCOMODATIONS ALONG ST. OLAVSLEDEN:

Farriers along this stage: